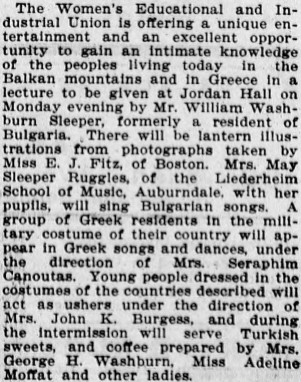 Cambridge Tribune, Volume XXXVI, Number 3, 15 March 1913
The Women’s Educational and Industrial Union is offering a unique entertainment and an excellent opportunity to gain an Intimate knowledge of the peoples living today in the Balkan mountains and In Greece In a lecture to be given at Jordan Hall on Monday evening by Mr. William Washburn Sleeper, formerly a resident of Bulgaria. There will be lantern illustrations from photographs taken by Miss E. J. Fitz, of Boston. Mrs. May Sleeper Ruggles, of the Llederhelm School of Music, Auburndale. with her pupils, will sing Bulgarian songs. A group of Greek residents In the military costume of their country will appear In Greek songs and dances, under the direction of Mrs. Seraphim Canoutas. Young people dressed in the costumes of the countries described will net as ushers under the direction of Mrs. John X. Burgess, and during the Intermission will serve Turkish sweets, and coffee prepared by Mrs. George H. Washburn. Miss Adeline Moffat nnd other ladles.