The mysterious deaths in London last month of Bulgarian defectors Vladimir Simeonov and Georgi Markov didn’t surprise fellow defector Stefan Bankov. Bankov, a Christian who left Bulgaria with his family in 1969 to escape persecution, now preaches the gospel by radio to his countrymen. Working with Underground Evangelism in Glendale, California, he says that he and his family have been subjected to Communist harassment, threats, and assassination attempts.

While flying from London to Seattle in 1974, a man and woman spilled a liquid on Bankov’s shoulder that paralyzed his side and made him violently ill for several days. Two months ago, shots were fired at him outside his home. Bankov says that during his stay in the United States, there has been an attempt to kidnap his daughters. He reports that strangers have made attractive offers to his wife and daughters to get them to return to Bulgaria, and that his family has received hundreds of abusive telephone calls. A note taped recently to a window at the Bankov home warned: “You are marked. We follow you all the time.”

Bankov made these threats public only recently and after the deaths of Simeonov and Markov, who were among a group of five Bulgarian broadcasters who defected. Markov died after being stabbed by a poison-tipped umbrella. Simeonov died after falling down the stairs inside his London apartment (London authorities aren’t discounting the possibility that he was pushed), and Vladimir Kostov survived a poisoning attempt similar to that which killed Markov. A fifth broadcaster now working for Radio Free Europe hasn’t been attacked.

Currently under police protection, Bankov is cooperating with the FBI and Scotland Yard in an investigation of the deaths of the Bulgarian defectors—victims, he is sure, of foul play on the part of Bulgarian Communists. “I think their (the Communists’) main purpose is to scare every member of my family,” Bankov said of his own situation. “They want to keep us under constant psychological pressure.”

The Bulgarians apparently are upset by Bankov’s radio witness that is beamed to his homeland of nine million people. He recently received a letter from Bulgaria that warned him to leave Underground Evangelism, an organization with an evangelistic outreach to Communist countries, or “the troubles will never stop.”

Bankov attended a Bible college in Los Angeles for four years before starting his radio ministry. He works seven days a week preparing sermons and lectures in systematic theology for his Bible College of the Air. Broadcasts are aired once a day over Radio Trans Europe in Portugal and over Radio Malta.

The Bulgarian government frequently uses “ground wave jamming” to block Bankov’s broadcasts into major Bulgarian cities, according to Underground Evangelism president Joe Bass. Copies of a two-volume set of Bankov’s sermons and lectures, as well as cassette tapes of his broadcasts, are being smuggled into that Communist nation.

Bankov became a Christian in 1953, and he later pastored an independent church in Bulgaria until the government closed it in 1964. Bankov still owns the tattered New Testament, held together by a rubber band, that was his only resource during his ministry in Bulgaria.

The forty-five-year-old Bankov is accustomed to persecution. Before he escaped Bulgaria, Bankov says he was “constantly under pressure.” “It was a difficult time with the Bulgarian government.… They accused me of being mentally sick because I could not see the progress of the Communist party or of the Socialist society.”

Bankov, who creates most of his own teaching materials during twelve- and fourteen-hour working days, fears most for the safety of his family. As he intends to continue his radio ministry, he says, “My prayer every day is just, ‘Lord, help the kids and my wife to understand.’ ”

East-West Christian Solidarity was founded by Dr. Stefan Bankov, an internationally recognized Christian leader who survived Communism and the Cold War. Rev. Bankov was an underground pastor in Bulgaria from 1958 to 1969. He emerged from behind the Iron Curtain in 1969, after escaping a prison death sentence by the communist leaders in Bulgaria. He has survived communist torture, beatings, and attempted murder. After his escape, Pastor Bankov continued to preach to the Bulgarians by radio broadcasts from Trans World Radio and Radio Ibra. Dr. Bankov has spoken before members of Parliament in Australia, in churches of countless denominations, and his name has been featured in newspapers, magazines, and on television in several countries. Dr. Bankov has also authored many books–including the first Slavic Bible Concordance for the Eastern Bloc countries. After the fall of communism, Dr. Bankov returned to Bulgaria, his native homeland, to plant new churches, minister to the needs of people in this third world country, and contribute to the country’s long-term development. East-West Christian Solidarity offers preaching, teaching, literature, and humanitarian relief, in addition to planting, building and supporting churches even in the large Muslim population in remote areas of Bulgaria. Dr. Bankov has over 35 years of experience in providing underground evangelism, outreach and humanitarian relief in Bulgaria. For more information, please contact us. 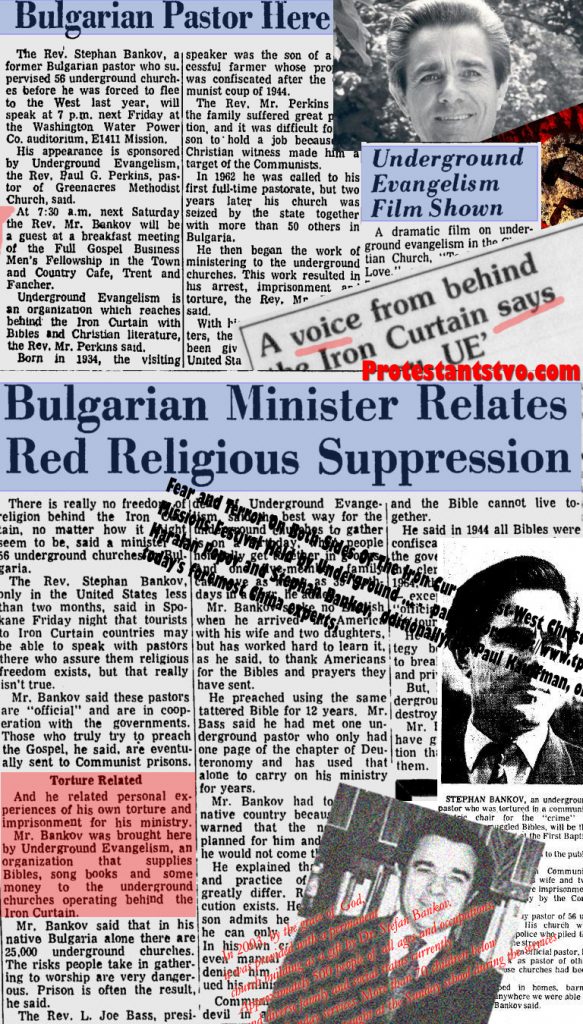