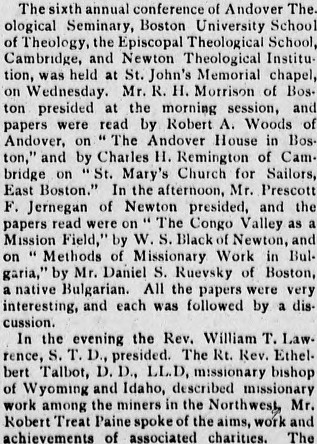 Missionary Conference| Cambridge Tribune, Volume XIV, Number 49, 27 February 1892
The sixth annual conference of Andover The. ological Seminary, lloston University School of Theology, the hipiscopal Theological School, Cambrulge, antl Newton Theological Institution, was held at St. John’s Memorial chapel, on Wednesday. Mr. R. 11. Morrison of lloston presided at the morning session, and papers were read by Robert A. Woods of Andeiver, on “ The Anelover House in lloste>n,“ and by Charles 11. Remington of Cambridge on “ St. Mary’s Church for Sailors, Boston.“ In the afternoon, Mr. Prescott F. Jcrmgan of Newton presided, anti the papers read were on “ The Congo Valley as a Mission Field,“ by W. S. Black of Newton, antl on “ Methods of Missionary Work in Bulgaria,“ by Mr. Daniel S. Riievsky of Boston, a native Bulgarian. All the papers were very interesting, anel each was followed by a discussion. In the evening tho Rev. William T. Lawrence, S. T. D., presided. The Kt. Rev. Ethel’ bert Talbot, D. 1)., 1.1..I), missionary bishop of Wyoming and Idaho, described missionary work among the miners in the Northwest, Mr. Kobe 11 Treat Paine spoke of the aims, work and achievements of associateel chaiitics. The Venerable Archdeacon w W Kiikhv, DiD.late of Rupert’s Land, a iittle man bubbling over with go, ,1 nature and wit,.delivered an atlelress on missionary work among th ■ Esqul* maux, telling Innumerable good st,ri,,s, that sometimes ill »ved his audience to laughter, though there was always a seti ,us p rinf ai ned at, ami his funel of anecdote was varietl by many narratives that often embodied much of of pathos. Bi-hop Brooks made the closing address, which was an earnest presentation of The missionary cause in general.