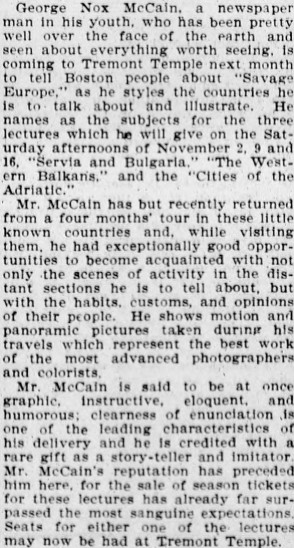 Cambridge Tribune, Volume XXX, Number 35, 26 October 1907
Oeorge Nox McCain, a newspiper man in his youth, who has been pretty Well over the face nf the earth ami Men about everything worth seeing, is coming to Tremont Temple next month to tell Boston people about „Savag. l Kurope,*’ as he styles the countries he is to talk about and illustrate. He names ns the subjects fnr the three lectures which he will give on the Saturday afternoons of November 2, 9 and lfi, „Servia and Bulgaria.“ „The Western Balkans.“ and the „Cities of the Adriatic.“ Mr. McCain has but recently returned from a four months’ tour in these little known countries ami. while visiting them, he had exceptionally go.id opportunities to become acquainted With not only the scenes of activity in the distant sections he is to tell about, but with the habits, customs, and opinions of their ptople. He shows motion and panoramic pictures takn dunmr his travels which represent the best work of the most advanced photographers and enlorists, Mr. McCain Is said to be at once graphic. Instructive, eloquent. .md humorous; clearness of enunciation Js one of the leading characteristics of his delivery and he ts credited with a rare gift as a story-teller and Imitator Mr. McCain’s reputation has precd“d him here, for the sale of season tickets for these lectures has already far surpassed the most singulne expectations. Seats for either on.- uf the ‘octures may now be had at Tremont Temple.