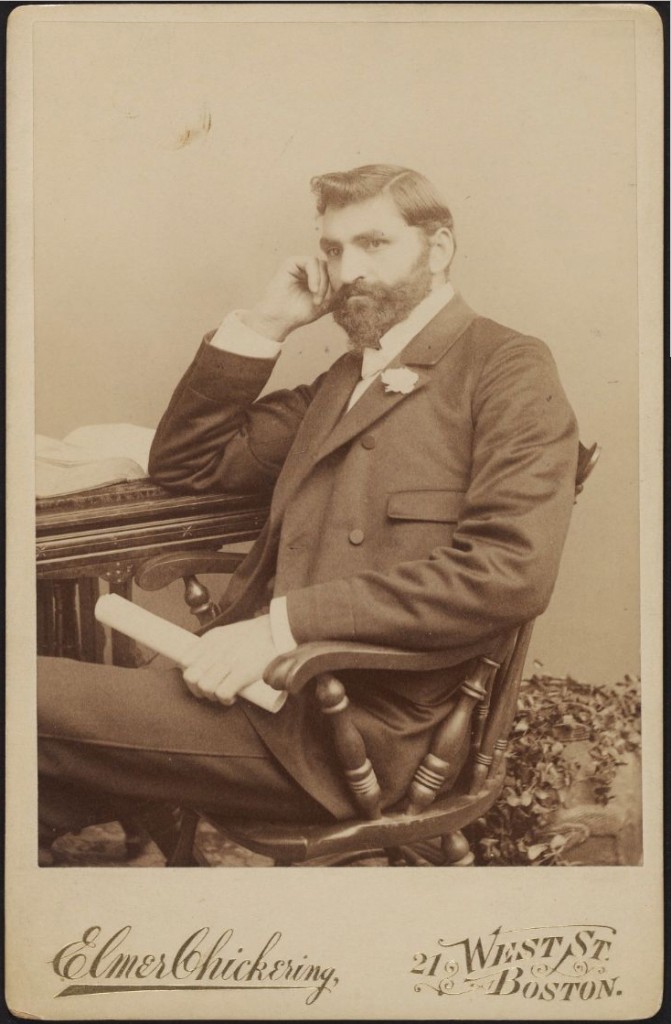 Lecture on Religious Life in Bulgaria.
Saturday, February 25, 1893
Mr. Stoyen K. Vatralsky will speak tomorrow evening, Feb 26, at 7.30 in the Chapel of Shepherd Memorial Church, on his experience of religious life in Bulgaria. It is an interesting fact, that Mr. Vatralsky is the first Bulgarian student who has ever been at Harvard University.

New Harvard Union.
Tuesday, November 07, 1893
A meeting of the New Harvard Union was held in 23 Holworthy yesterday afternoon. Of the men recommended by the judges, it was at first decided to elect only five. It was impossible to make a choice for the fifth man, and the number was therefore increased to six. The completed list of successful candidates is as follows: Charles E. Bryan, H. Morris, W. W. Orr, F. H. Smith, Jr., E. F. Snell and S. K. Vatralsky.

Lecture on Bulgaria.
Thursday, November 16, 1893
Stoyan K. Vatralsky ’94, will lecture, at 7.45 tonight, in the Prospect Street Chapel, on „Life, Customs and Love Affairs of the Bulgarians.“ Mr. Vatralsky delivered a lecture on much the same lines last year, when he met with marked success.

Competitive Debate.
Saturday, March 31, 1894
A competitive debate was held last night in Sever 11 under the auspices of the Harvard Union and the Wendell Phillips Club, to choose Harvard’s representatives in the coming Harvard-Yale debate. The judges of the debate were Professor L. B. R. Briggs, Mr. J. J. Hayes and Professor Edward Cummings. H. A. Cutler ’94 presided. The question debated was: „Resolved, That the members of the cabinet should be given full membership in the House of Representatives.“

Official Notice.
Saturday, June 16, 1894
FRENCH 6.- Library keys will be redeemed at the examination today, on presentation of key and check. Keys held on checks of former years, or presented without a check, cannot be redeemed. Keys will not be redeemed after today.
F. C. DE SUMICHRAST.ECONOMICS 1.- Examination rooms:
Abbe to Fenollosa, U. E. R.
Flandrau to Greenberg, U. 4.
Greenwood to Holmes, U. 16.
Holt to Kirkhoff, U. 17.
Kimball to Norton, Upper Dane.
O’Brian to Slater, Lawrence 1.
Smith to Vatralsky, Sever 5.
Wadsworth to Winslow, Sever 6.

All seniors are requested to meet in front of Holworthy at 3.30 p. m., dressed in cap and gown. Men who have been measured may obtain their caps and gowns today at the Cooperative store. Seats will be reserved for the Faculty and their families until 3.50 p. m.

Saturday, November 02, 1895
The Catholic Club has nearly completed arrangements to have Bishops Keane and Ireland deliver addresses in Sanders Theatre some time during the year. Stoyan Vatralsky ’94, contributes in the November Forum a paper on Stamboloff, the late Dictator of Bulgaria. The article is included in „Studies of Notable Men.“

Arrangements have been made for an address, open to the public, to be delivered by Professor Baker under the auspices of the Harvard Forum. Professor Baker will speak on some subject treating the special features of debating at Harvard, its defects and its possibilities. The date has not yet been definitely chosen, but the address will probably take place shortly after the Christmas recess.

Liberal Club to Honor Vatralsky
Friday, March 06, 1925
Stoyan Krstoff Vatralsky ’24 will address the Liberal Club at 1.20 o’clock today on the subject of Bulgaria and the critical position in which it stands politically. Vatralsky is the first Bulgarian who graduated from Harvard.

Born in a Bulgarian village where there was no school, Vatralsky struggled for his early education, came to America and worked his way through Harvard. In his Senior year, he was baccalaureate poet.